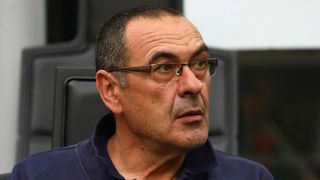 Maurizio Sarri said he needs to make "one or two adjustments" before Chelsea will be ready to play his football as he looked forward to going head to head with "the most important coaches in Europe".

The 59-year-old arrived at Stamford Bridge to replace Antonio Conte as Chelsea's head coach, ending his 13-year spell in Italy, where he worked at nine different clubs.

Having signed a three-year contract with the Blues, Sarri said he was excited to be in charge of his new squad.

"I think Chelsea are a good team," Sarri told Chelsea TV. "The problem is that in England, there are five or six very good teams.

‘I would give all of my possessions to win something with Chelsea.’Maurizio Sarri’s first interview as Chelsea head coach is a must watch on our new app!July 16, 2018

"I think with one or two adjustments, we can try to play my football.

"In the Premier League there are all the most important coaches in Europe, maybe in the world. It will be very exciting to play against [Pep] Guardiola, [Mauricio] Pochettino, [Jose] Mourinho, [Jurgen] Klopp and all the others."

Manchester City boss Guardiola had previously said that "it would be a pleasure" for him if Sarri were to come to the Premier League, but Sarri responded humbly when asked about praise from one of his new rivals.

"Guardiola is principally a friend," said Sarri. "I think he has spoken well about me for this motive."

Sarri gave his assessment of Jorginho, who joined Chelsea after the London club fended off competition from City for his signature, and he was glowing in his account of the Italian midfielder's capabilities.

"Jorginho is not a physical player, he's a technical player," said Sarri.

"But [his] most important quality is that he's very quick in the mind so he has the ability to move the ball very quickly."