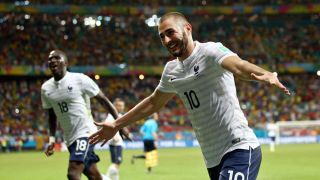 Les Bleus won their second title in Moscow as Antoine Griezmann, Paul Pogba and Kylian Mbappe starred and scored in a 4-2 win over Croatia.

However, France were without Benzema, who has not played for his country since 2015, having been investigated in relation to an alleged attempt to blackmail his international team-mate Mathieu Valbuena.

But the Real Madrid star was still among those to revel in France's victory.