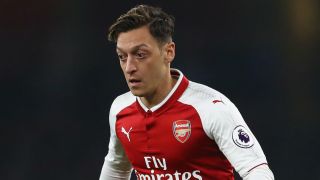 Mesut Ozil is unavailable and Laurent Koscielny is in doubt for Arsenal's Premier League match at home to Brighton on Sunday.

Germany international Ozil missed the 4-2 Europa League victory at BATE Borisov on Thursday, having played only seven minutes of Monday's 2-0 league win over West Brom as a late substitute.

The 28-year-old attacking midfielder, who previously missed the crunch Premier League draw with Chelsea and EFL Cup victory over Doncaster Rovers due to knee inflammation, has been left out of the Germany squad for next month's World Cup qualifiers.

Wenger revealed Ozil's injury is "very short-term", but the Brighton match will come too soon for him.

"He is not far, but he is not enough for Sunday," the manager told Arsenal's website.

The Gunners boss also revealed centre-back Koscielny, who was suspended for the Europa League match in Belarus, is in doubt for the visit of Chris Hughton's promoted side to Emirates Stadium.

Wenger said: "We have a doubt about Laurent Koscielny unfortunately and he will have a test [on Saturday]. It's an Achilles problem, it's ongoing. I think everybody else should be available."