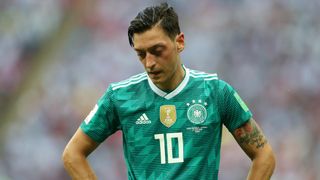 Mesut Ozil's retirement from international football offers an opportunity for younger players to prosper, according to Lothar Matthaus.

Ozil has made himself unavailable for selection due to perceived mistreatment from the German Football Federation (DFB).

The midfielder ended his career with the national team in a three-part statement posted on social media, calling out both the DFB and their president, Reinhard Grindel, for incompetence and insensitivity toward his Turkish heritage.

However Matthaus, who won 150 caps, does not believe Ozil is a huge loss, given his recent performances for the national team.

Feeling proud to be captain today.  Good win and another fantastic support here in Singapore July 28, 2018

"Mesut has been a great performer in the national team for eight years, but for a year and a half I have not liked [his displays]," Matthaus told Kicker. "But I have criticised him for that, everything else does not interest me.

"From a sporting perspective – even if it sounds harsh – it is not a loss, but a chance to change something in this position.

"It could have been dealt with better from the beginning, as many people were involved. It is a pity and sad that it did not work, because Ozil has done much for German football.

"The topic has been underestimated from the start, even by the DFB. Anyone can take pictures with who they want, but then they have to be prepared to face criticism and give answers – it was drawn out for too long."