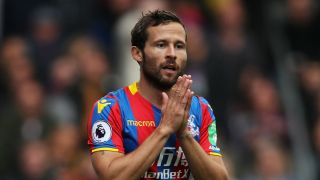 It is the goal the whole Premier League had been waiting for. It took 731 painstaking minutes, but Crystal Palace finally scored in the top-flight for the first time this season on Saturday.

The Eagles made an appalling start to the campaign and had failed to register a goal or a point before their home match against Chelsea.

But all that changed in the 11th minute at Selhurst Park. James McArthur played in Andros Townsend on the right of the penalty box and the winger fired a cross into the area that hit Yohan Cabaye's knee following a challenge from David Luiz, before glancing off Cesar Azpilicueta and beating Thibaut Courtois.

Sadly for the Eagles, the lead lasted just seven minutes as Tiemoue Bakayoko headed in from Cesc Fabregas' corner.