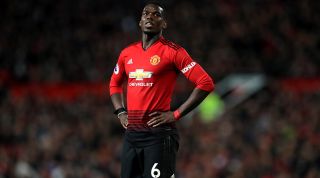 Juventus are reportedly looking to bring Paul Pogba back to Serie A from Manchester United, and are willing to let both Paulo Dybala and Alex Sandro move the other way as part of the deal.

Pogba's future has been a topic of speculation almost all season. Openly criticised by Jose Mourinho, before coming back into favour under Ole Gunnar Solskjaer, he finished the season openly arguing with fans after Cardiff's 2-0 win at Old Trafford on the final day.

United have been repeatedly linked with Dybala in the past, with strong rumours that he was going to make the move last summer, and even previous stories that United were going to ask Pogba to convince Dybala to join.

As for Sandro, he would provide United with much-needed support at left-back, with Luke Shaw currently United's only natural option in the position.

United have recent form in brokering high-profile swap-deals, with Henrikh Mkhitaryan and Alexis Sanchez exchanging places in the middle of last season.

If this deal does go through, then the wheels will have to be set into motion quick – Solskjaer is keen to have United's business finalised before the start of pre-season. He said: “We’re going to sit down and go through all the plans. And we’ll be ready when 1 July comes. There will be no excuses."