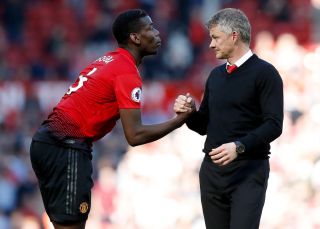 Three years after returning to the club from Juventus for a world-record fee, there is widespread talk about the 26-year-old moving on to pastures new this summer.

Real Madrid are strongly interested in a player who was voted into this season’s PFA Team of the Year but has failed to win over a number of United supporters given his efforts across the team’s poor campaign.

Pogba was heckled by some fans after the embarrassing 2-0 home defeat to relegated Cardiff on Sunday, which is thought to have left the midfielder in an understandably bad mood as he made his way down the tunnel.

United have been steadfast in their stance that the midfielder is not for sale, but fans’ favourite Evra cannot help but feel that his former Juventus and France colleague will leave.

“It’s not like I am protecting Paul, but when there are incidents like yesterday (Sunday) with the fan, they are killing Paul,” the former left-back told Sky Sports.

“He has the most goals, most assists. I know you can question his leadership and in the last few games you want more, so that’s why you can criticise him right now, but overall he has been the best player this season.

“Just because it’s Paul Pogba, he has haircuts, he dances, his Instagram and everything, people will criticise him while forgetting the player that he is.

“Only him and (David) De Gea can play in a big team in Europe.”

Asked if he would build a new team around Pogba or whether the midfielder would leave, Evra said: “I think he will leave because you need to feel the love when you play somewhere, you need to be committed.

“If Paul decides to stay another year and then leave, or stay another few years, maybe the fans will love him because he is committed.

“The United fans love you when you say you are committed.

“When I go to the game and I see fans shouting and swearing at players, I am in shock.

“In my time, you can play the worst game of your life and they will clap you. I remember losing 4-1 at home to Liverpool and they were still singing. That’s the United fans I know – they’ve just had enough.

“I don’t talk for Paul, whether he stays or leaves, but when you have negativity around you, you should leave.”

They are eye-catching comments from Evra, who was pictured with Pogba last week and has a close relationship with the United midfielder.

“I advise Paul every day,” Evra said. “We FaceTime, we talk.

“Before he left the club when he was young to go to Juventus, I spent two hours at his house talking to his mother and brothers, saying how Paul can be the new Patrick Vieira at United.”

Evra not only has an association with Pogba but also with executive vice-chairman Ed Woodward, whose search for a technical director has seen a number of former players linked with a return to United in one capacity or another.

“We talk but I do not think I am ready myself,” he added.

“I sacrificed my life a lot to succeed during all my career and if I want a role in Manchester United right now, then I would have to sacrifice my life all over again. I do not want to be put in a box.”