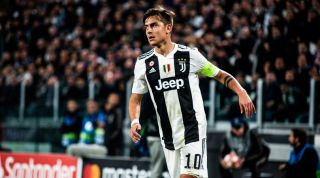 Gazzetta dello Sport reports that the Old Trafford club have revived their long-standing interest in the Argentina international.

A face-to-face meeting is set to take place between the two clubs, at which the possibility of a concrete bid will be discussed.

However, Dybala wants to stay in Turin for the start of the Maurizio Sarri era and is ready to refuse moves elsewhere.

The 25-year-old struggled for form and regular game time last season following Cristiano Ronaldo’s arrival, but Sarri intends to use him in a new false nine role for the 2019/20 campaign.

Dybala started 24 matches in Serie A for Juventus last term – the fewest amount in his four seasons at the club.