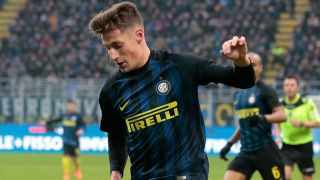 Inter have announced that Andrea Pinamonti has signed a new contract at the club.

The highly-rated striker, who turned 18 on Friday, has extended his deal through to June 30, 2021.

Pinamonti had been linked with Premier League clubs Tottenham and Liverpool, although his agent had suggested last month that his fondness for Inter would likely influence a decision over his future.

"In addition to the new contract, we are also discussing the sporting plans with the Nerazzurri," Tullio Tinti told Calciomercato.

"Andrea is highly regarded in Italian and European football, but his attachment to Inter will have an effect on his decision."

Pinamonti has made two appearances for the senior side this season, against Empoli in Serie A in February and in the Europa League against Sparta Prague.

The Italy youth international has shone for the Primavera side, scoring 16 times in only 20 appearances.