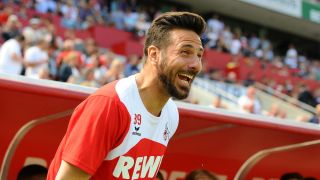 Werder Bremen have confirmed Claudio Pizarro has returned to the club for a fifth spell ahead of what is expected to be the final season of his career.

The 39-year-old striker has signed a one-year deal with Werder, who first brought him to European football back in 1999.

"I am delighted to have the chance to be part of this team again in order to hang up my boots at the club where it all began in Europe," Pizarro told the club's official website.

"I am looking forward to the challenge, to passing on my experience, but I will not make any secret of the fact that I have come back to score goals. I am convinced that we can have a strong season together."

BREAKING: HE'S BACK! Claudio has returned to , where he intends to end his career in Green and White! July 29, 2018

Pizarro, who will turn 40 in October, is expected to retire at the end of 2018-19, with the club expressing their pride at his intentions to "finish his career with the Werder badge on his chest".

"Claudio knows that he will not be a definite starter in the team but he will have an impact in the dressing room and will do the team good with his extremely positive energy, his conviction and his hunger for success.

"If he is fit and stays healthy, I am certain that he can also further help us at critical moments on the pitch. There is no doubting his talent and he adds something different to the strike force. Claudio is a legend and he will get his moments this season."

A six-time Bundesliga champion with Bayern Munich, Pizarro was first signed by Werder 19 years ago after they spotted him in action for Allianza Lima in his native Peru.

He was on the move again within two years, heading to Bayern until 2007. He then joined Chelsea on a free transfer, although things did not work out in the Premier League.

The Blues loaned him back to Werder for the 2008-09 campaign and he impressed, doing enough to persuade the club to sign him permanently after initially returning to Stamford Bridge for a few weeks.

Pizarro again left Werder for Bayern in 2012, winning the treble a year later, but he would be back for a fourth spell in 2015. He spent last term with Cologne, who were relegated.