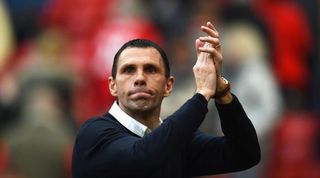 Louis van Gaal's men were underwhelming in Sunday's 1-1 Premier League draw at the Stadium of Light, which followed their season-opening 2-1 home loss to Swansea City.

The display was disjointed and Juan Mata's 17th-minute goal handed the visitors a scarcely deserved lead, though Jack Rodwell levelled for Sunderland before the interval.

Yet Poyet believes Van Gaal will ultimately find the right formula and spark a turnaround.

Asked if he still thought United would finish in the top four, the Uruguayan said: "Yes, because [Marcos] Rojo [who missed out against Sunderland as he has not yet received a work permit] has been added and they will still spend more money.

"I know Van Gaal very well and if you give him time he will achieve what he promises. I have no doubt."

While the result was a great source of frustration for Van Gaal, Poyet declared himself pleased with a point.

Chief among the positives was the performance of new boy Will Buckley, who caused United plenty of problems on his home debut.

He added: "I am so pleased he had a very good first half because everybody knows why I was so consistent in trying to get him.

"He was electric, direct and he will do plenty of things. We have to be patient with him but he showed why he is here."