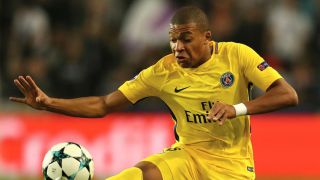 Kylian Mbappe believes patience is key for Monaco, who are struggling to recreate their heroics of 2016-17 after the France teenager headlined a number of high-profile departures.

Last season, Mbappe was at the forefront of a side that stunned Paris Saint-Germain to claim the Ligue 1 title, while also embarking on a scintillating run to the Champions League semi-finals.

PSG moved to strike back against that uprising by securing the services of Mbappe on a season-long loan, which will become a permanent €180million deal at the end of the campaign.

The likes of Bernardo Silva, Benjamin Mendy and Tiemoue Bakayoko also departed Stade Louis II and Leonardo Jardim's side, shorn of the backbone of that thrilling 2016-17 vintage, have toiled badly, especially in Europe.

Tuesday's 2-1 home defeat at the hands of Besiktas leaves Monaco bottom of Group G with just one point from three matches. By contrast, Mbappe's PSG have won all of their Group B outings, scoring 12 goals without conceding.

"I think we should give them time," Mbappe said after scoring the opener in Wednesday's 4-0 win at Anderlecht to become the Champions League's highest scoring teenager, surpassing Patrick Kluivert.

"You know, when you lose a lot of first-team players, you need time and I think we are too demanding with this team. Some young players came, they need time.

"You saw the players, they are good players, so I'm not worried for them.

"But it's true, it's a pity they started this Champions League like that but it's not finished yet for them, if they win their three games, they can qualify so I hope for them and French football they will make it and they have to know we are supporting them."