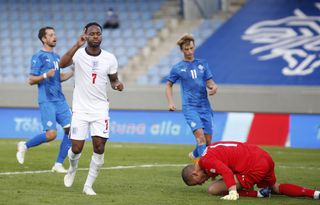 With March’s friendlies scrapped and Euro 2020 postponed due to the coronavirus pandemic, the Three Lions returned with a whimper in front of empty stands in Reykjavik after their enforced 10-month break.

Harry Kane’s disallowed opener and Kyle Walker’s sending off looked to have been the key moments in Iceland, only for England to snatch a late 1-0 win as Birkir Bjarnason blazed over a penalty moments after Sterling slotted one home.

It was mad ending to an otherwise forgettable match that had a distinct pre-season vibe about it, with precious little quality attacking quality on display.

England were nothing like their free-flowing best at Laugardalsvollur, where the absence of a video assistant referee meant Kane’s early opener remained ruled out for offside.

That was the closest Southgate’s side got in a first half in which they enjoyed 76 per cent of possession but struggled to create, even with playmaker Phil Foden making his first start.

Iceland were defending resolutely and England’s afternoon was made all the more difficult when Walker picked up a second booking with 20 minutes remaining.

Danny Ings and debutant Mason Greenwood came on in a bid to spark a late winner, which arrived at the death after Sverrir Ingason was adjudged to have handled Sterling’s shot. The Iceland man was given a second booking and the England forward rolled home the penalty.

But the drama did not stop there. Joe Gomez gave Iceland the chance to level from their own penalty, but former Aston Villa midfielder Bjarnason missed the target.

Given the way the match panned out, it hardly felt like England had exacted revenge for their Euro 2016 humbling to Iceland.

Southgate started four players from that embarrassing night in Nice, with one of those survivors Kane determined to score an early opener in the Three Lions’ first match of 2020.

Returning to action with a win! 👊@sterling7's late penalty seals the three points for the #ThreeLions against Iceland in the #NationsLeague. pic.twitter.com/69sUHQmoZb— England (@England) September 5, 2020

Having tried his luck from the edge of the box, the England skipper found the net with just six minutes on the clock. Kane met a fine whipped cross by Sterling at the far post, but was bemused to see the goal ruled out for offside.

Southgate’s men continued on the front foot and Walker, winning his first cap since the Nations League finals in June 2019, saw a rifled strike deflected into the side-netting before Declan Rice fluffed his lines.

But England’s admirable patience in possession soon saw play become predictable, leading the tempo to slow dramatically as Iceland frustrated without mustering a clear-cut chance of their own.

The hosts’ only shot was Arnor Ingvi Traustason’s poor free-kick after Walker brought down Albert Gudmundsson on the edge of the box and picked up a booking.

The visitors continued to toil in attack after the break, with Rice blazing over, Jadon Sancho struggling and Kane seeing an acrobatic attempt blocked.

A good win to start our season! Tough game and lots to improve on! 💪🏴󠁧󠁢󠁥󠁮󠁧󠁿 pic.twitter.com/BBuD4rL78q— Harry Kane (@HKane) September 5, 2020

Kieran Trippier’s free-kick was just headed behind his own goal by Kari Arnason and Southgate replaced Foden with Danny Ings – winning his second caps five years after his first – in a bid to add extra bite.

The dynamics changed soon after, though, as Walker’s overzealous challenge on Traustason led to a second yellow card from referee Srdjan Jovanovic.

England still pushed for a winner and Southgate turned to 18-year-old Mason Greenwood, who came on for his debut in place of exhausted skipper Kane.

Victory looked a step too far but the Three Lions got a late penalty as the referee decided Ingason had handled Sterling’s shot. The Iceland player was sent off for his second booking and the Manchester City forward scored the resulting penalty.

Yet there would be an even later spot-kick at the other end.

Gomez was adjudged to have brought down Holmbert Fridjonsson in the box and Bjarnason sent Jordan Pickford the wrong way with his stoppage-time penalty, only for the midfielder to clear the bar and hand England three points.