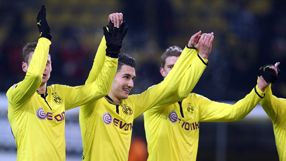 Dortmund coach Jurgen Klopp has laughed off suggestions that his team, in third place on 36 points, could still catch leaders Bayern Munich, who are 12 points away, but said securing second spot and a Champions League ticket next season was their primary goal.

Leverkusen are a point ahead of Dortmund in second place.

"Dortmund, champions this year, that is ridiculous," Klopp said this week. "But our goal is to catch Leverkusen and finish the season in second place."

"We need to get 51 points, the maximum remaining from 17 games, and Bayern are 12 points ahead which means they would need a maximum of 39 points. Is that realistic?" he said of Dortmund's title chances.

The champions had also talked down their chances in their two back-to-back title-winning seasons but realist Klopp knows the second-place target is well within their reach, especially against a team he has lost to only once in nine league encounters since taking over Dortmund in 2008.

Klopp should have defender Marcel Schmelzer fit for the game while crowd favourite Nuri Sahin, back after spells at Real Madrid and Liverpool, could make his first start for the club after playing in a mid-week friendly against Cologne.

Leverkusen, however, will not surrender their slim lead without a fight, being the only Bundesliga team this season unbeaten at home.

A goalless draw at Freiburg last week cut their gap with Dortmund to one point but Leverkusen are not piling on the sort of pressure that has caused them to fold in past seasons.

"I would not rate the importance of this game too high," said Leverkusen captain Simon Rolfes. "We will indeed measure ourselves on the highest level but there are only three points to give out against a direct rival.

"We are going into the game with a lot of confidence and at this level it may be details that will decide the game. We have to keep the pressure up against them throughout the game."

When the two sides face each other on Sunday, Bayern could have already extended their lead over Leverkusen to 14 points if they beat Mainz 05 on Saturday.

Fellow Champions League competitors Schalke 04, who have won only one of their last eight league games, will be looking to end their bad run when they host bottom-placed Greuther Fuerth.