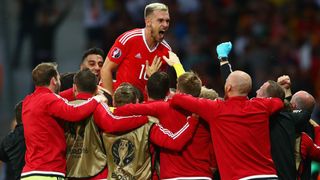 A roaming, rampaging Wales star was billed as the number one threat to the world's number two side. But it was not Gareth Bale who inspired Wales to their greatest ever victory.

The Real Madrid man had been vital, of course, in firing his side this far, to their first quarter-final at a major tournament since 1958, but while he found life a little tougher under the floodlights in Lille, Aaron Ramsey seized the mantle.

The Gunners star has endured a frustrating last 18 months. After recovering so successfully from that horror leg break in February 2010, a hugely inconsistent campaign with Arsenal last term led some to wonder if, at the age of just 25, his best days were already behind him.

Those doubts must certainly be banished now. Ramsey was rip-roaring from the first whistle, starting towards the left but drifting and darting across the entirety of Chris Coleman's midfield.

His runs beyond Axel Witsel and Radja Nainggolan caused panic for a Belgium defence starting with two 21-year-olds, even after Nainggolan's scorching opening goal. It was his corner that gave Ashley Williams a free header from which to equalise, before another surge forward and pinpoint cross set up Hal Robson-Kanu for a turn and finish that would make Dennis Bergkamp proud.

Ramsey only managed five assists all last season with Arsenal, from a total of 41 appearances. He has supplied four already in France. Indeed, he has either scored or set up five of Wales' goals in these finals, marking the first time a British player has achieved such a feat since Wayne Rooney in 2004.

Wales, of course, had heroes across the pitch. Captain Ashley Williams spoke of a "band of brothers" this week, and not once was there a hint of a surrender here.

James Chester made a brilliant clearance to deny Romelu Lukaku a tap-in; Willaims and Ben Davies were exemplary either side.

Ahead of them, Joe Ledley and Joe Allen were bundles of energy at the heart of the team. Coleman will depend on them to carry the burden in the last four, with Ramsey set to miss out after picking up a booking for handball.

Another failure for Belgium's golden generation will grab plenty of headlines, though a team with an average age of 24.7 is not to be written off completely - especially if Wilmots, already an unpopular figure, is removed.

But it feels wrong to decry another Belgium underachievement. July 1, 2016 will be remembered as the greatest moment in Welsh football history, and their golden-haired wonder deserves every accolade that comes his way, even as he prepares to miss a date with destiny secured on the back of his exemplary performance.