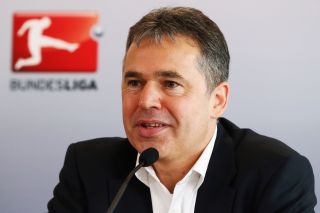 A lack of technology in the German top flight has come under increased scrutiny following Stefan Kiessling's ghost goal against Hoffenheim on Friday.

With Sami Hyypia's side holding a narrow 1-0 advantage going into the final 20 minutes, Kiessling headed an effort into the side netting, but a goal was awarded after the referee was deceived when the ball crept through a hole in the netting.

Leverkusen went on to win the match 2-1, prompting Hoffenheim to lodge an official complaint to the German Football Association asking for the match to be replayed.

But Rettig insists the incident has not changed the opinion of the DFL, who are satisfied with the current guidelines on technology systems.

Speaking to Frankfurter Allgemeine Zeitung, he said: "We at the DFL are not against technological advancement, but we are talking about a highly complex system here which is potentially still glitchy.

"A tolerance of three centimetres, which FIFA currently permits, is not acceptable for us.

"In February, March 2014, the tolerance limit is tested again. If this results in a different valuation than at present, we would possibly decide again.

"Only when this has been significantly reduced, could we trust a technological chief referee.

"The best way to control things is with fair play. If everybody who carries responsibility also admits mistakes and can revise incorrect decisions, then this approach is better than any technology."