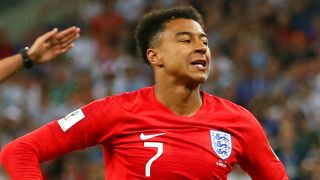 Lingard impressed during England's run to the semi-finals of the World Cup in Russia, scoring a stunning goal during the 6-1 group-stage demolition of Panama.

United have endured an unhappy pre-season to date, with Jose Mourinho's under-manned squad struggling in their International Champions Cup matches as the Portuguese waits for his World Cup stars to return.

Lingard is one of those enjoying an extended break in Miami but found the time to tap into the knowledge of one of the modern era's most celebrated players.

Alongside a picture with Ronaldinho posted on Lingard's Instagram account, the 25-year-old wrote: "Thanks for the advice #goat."

Following United's 4-1 friendly defeat to Liverpool, Mourinho seemingly criticised players for taking time off so close to the new season and told those still away to "take care of themselves a bit".

Lingard and Marcus Rashford have been holidaying together and the latter posted on social media, showing them preparing to train.

United face Real Madrid in their final ICC match before hosting Leicester City in the Premier League opener on August 10.