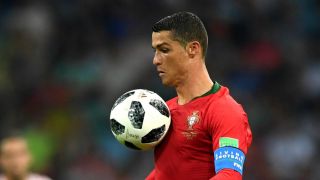 Portugal's captain scored with all three of his country's shots on target in a thrilling 3-3 Group B opener in Sochi on Friday.

In opening the scoring from the penalty spot in the fourth minute, Ronaldo became the first player to net in eight straight international tournaments.

David de Gea's mistake gave Ronaldo his second of the game before the break and, although Diego Costa's brace and Nacho Fernandez's wondergoal put the 2010 champions in front, the Real Madrid star had the final say.

After winning a free-kick on the edge of the area, Ronaldo bent in a 20-yard stunner that left De Gea motionless, writing yet more chapters in his personal history book.

Ronaldo, 33, also became the first player to score a World Cup treble against Spain, while drawing level with Ferenc Puskas of Hungary on 84 international goals - only Iran icon Ali Daei has more.