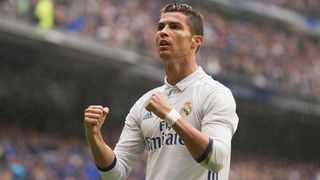 Zinedine Zidane says Cristiano Ronaldo knows he splits opinion among football fans but insists he has the full respect of everyone inside Real Madrid.

The in-form forward has been whistled by supporters at Santiago Bernabeu on occasions this season and again stressed he does not want to be targeted by Madrid fans after his brilliant hat-trick in the 3-0 win over Atletico Madrid in their Champions League semi-final first leg on Tuesday.

Head coach Zidane was asked whether Ronaldo deserves more respect for his Madrid accomplishments and acknowledged there was no middle ground when it came to the Portugal international.

"With Cristiano you can either love him or you don't – there is nothing really in between," Zidane told reporters ahead of Saturday's LaLiga match away to Granada.

"He knows that as well. But Cristiano has a lot of respect, he has respect from everyone here and that is the most important thing. He has it from all his team-mates, all the club and the coach as well."

Ronaldo is expected to be rested for Madrid's trip to face Granada with the second leg of the Atletico tie in mind.

The 32-year-old has been regularly rotated in the second half of the season and Zidane says he is constantly talking to his star man about the situation.

"I speak to Cristiano a lot," added Zidane. "He knows and he understands well that until now he has always played 50, 60, or 70 games a season. The accumulation of all the years, he knows as well, sometimes you have to stop and rest.

"I have said before that I don't want to be the coach that has made the decision to leave Cristiano out. I speak to him and all the players a lot and I know that at times players have to rest.

"With all the games that we have to play in, if we want to be in good form and be at a great physical level then we have to rest players - that's it. It is a dialogue that we have. We have conversations about it."

Zidane confirmed Raphael Varane will not be risked against Granada after missing training on Friday, while Pepe – who did prepare for the match with the group – will not return until next week, although Fabio Coentrao is back.

"Raphael Varane has felt something, it is nothing big, but we don't want to risk anything with a player who has got a slight niggle."