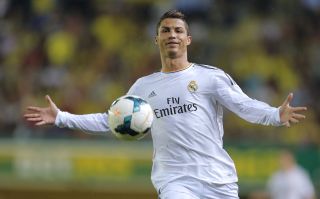 The 28-year-old had been linked with a close-season return to Manchester United or a move to Ligue 1 champions Paris Saint-Germain, but has now put an end to speculation regarding his future by putting pen to paper on an extended deal at the Bernabeu.

And the Portuguese forward - who has scored over 200 goals for Real since departing Old Trafford in 2009 - said that while he was flattered to attract interest from other clubs, he never wanted to leave the Spanish capital.

"Everyone knows I was in Manchester for six years," he said. "It was a club that gave me many things and I don't forget that.

"But Manchester is in the past. Real Madrid is my present, my family is here, I'm really happy here.

"I respect all the clubs, who knocked at the door to ask something about me, but they always know my only goal was to be here and to play at this club until the end of my career."

On the PSG rumours, he added: "I might have thought about it, but I wanted to stay here. If you're at the best (club) you want to stay there."

Last year, Ronaldo sparked a frenzy regarding his future by saying he was "sad" in Madrid, but he is now satisfied and hungry for success under new manager Carlo Ancelotti.

"I'm really happy here," he added. "I've signed a new deal for five years, so everything has gone well.  I just want to win trophies for the club.

"I just want to give my best on the pitch with goals, assists and help my team-mates. I just want to do my best always. I'm going to continue fighting for the club and doing the best I can every day.

"Thanks to the fans for giving me so much support. The affection from the fans helped me make the decision to stay here."

Real president Florentino Perez was thrilled to keep Ronaldo at the club, and believes his best is yet to come.

"Cristiano's statistics are simply mind blowing," he added. "There are lots of goals, triumphs and trophies to come from Ronaldo.

"The best player in the world knows the Bernabeu is his home."