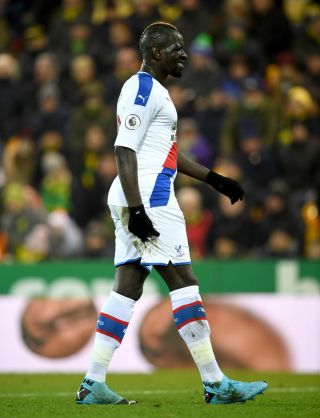 Crystal Palace boss Roy Hodgson admits he has yet to solve the dilemma of managing player fitness over the festive schedule – with defender Mamadou Sakho now set to be out for “a considerable period”.

Centre-back Sakho was forced off at half-time during the 1-1 Premier League draw at Norwich on New Year’s Day because of a hamstring problem.

Hodgson also revealed Wilfried Zaha had played through the pain barrier while carrying a fitness issue, the forward helping to set up a late equaliser which was given on VAR review.

With the likes of left-back Patrick Van Aanholt also having recently added to a packed treatment room, Hodgson knows he faces another delicate balancing act as the depleted squad prepare for Sunday’s FA Cup third-round tie against Derby.

“It (the injury list) has been added to with Mamadou Sakho pulling his hamstring against Norwich. He will be out for a considerable period,” the Palace boss said.

“Like all teams at this time, here we have got players who have done extremely well during this period to actually get on the field and play – but I couldn’t possibly say that they are 100 per cent fit.

“Then you get the concerns that quite a few managers speak about really over this period of time, that you will be asking players to play more even though they are actually feeling certain problems.

“We are running the risk that by putting them out there they are going to pull those muscles and be out for a longer period, so it is a very difficult situation.

“Maybe more so for us than many, because that long injury list means the squad is so remarkably small.

“The problem, though, is the same – do you say we need to play what we think is near to our best team, and we put players on the field and risk that they are going to pick up an injury, or do we say we can’t afford to risk it with all the games we have coming up.

“It is a dilemma and I am still waiting for some bolt from the blue which will tell me what I need to do to solve the dilemma – but it hasn’t happened yet.”

Hodgson will make a late call on Zaha, while Academy forward Brandon Pierrick get another chance to impress after making his Premier League debut when coming on at Carrow Road.

“We would certainly want to put more resources into the FA Cup, it is a great competition – nobody wants to say it doesn’t matter,” Hodgson said at a press conference.

“But the bottom line is we have to balance what is available to us with what we can possibly do.

“I will be certain that whatever team we put out on Sunday will be the absolutely most competitive team we can play without really jeopardising our future.”