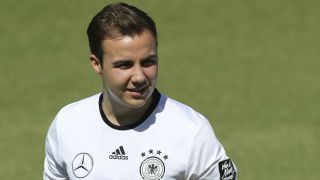 Bayern Munich chairman Karl-Heinz Rummenigge has confirmed the Bundesliga champions are in talks with Borussia Dortmund over the sale of Mario Gotze.

The Germany international joined Bayern from BVB in 2013, but has thus far largely failed to live up to the high expectations at the Allianz Arena and struggled for first-team football under Pep Guardiola last season.

The 24-year-old has been heavily linked with a move away from the Bavarians in recent months, but he initially dismissed talk of a return to Signal Iduna Park or a switch to Liverpool where he would be reunited with former BVB coach Jurgen Klopp.

However, it now appears that Gotze may be on the move with Bayern in talks with their German rivals over a transfer.

"I can confirm that talks with Borussia Dortmund have taken place," Rummenigge told Sport1.

"There have also been talks with his agent, but the deal is not done just yet. Both clubs will have to reach an agreement over a transfer fee first.

"Gotze has been at Bayern for three years and it did not work out for him. I am not surprised that Gotze wants to leave. He is 24 years old and needs to play regularly."

Bayern have reportedly set a €27 million asking price for the attacking midfielder, whose contract runs until June 2017.