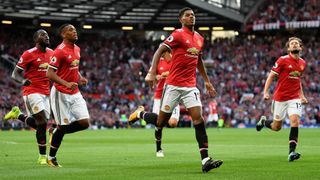 Iconic boss Ferguson guided United to their 20th league title - the 13th under his stewardship -  in 2012-13 but the Red Devils have struggled since, watching rivals Manchester City, Chelsea and even unheralded Leicester City lift the Premier League trophy.

However, following underwhelming spells under David Moyes and Louis van Gaal, United are starting to replicate teams of years gone by with Mourinho at the helm.

After winning the Europa League and EFL Cup last term, United – boosted by the arrivals of Romelu Lukau and Nemanja Matic – have made a rampaging and flawless start to the season – winning their opening three matches, scoring 10 goals without conceding.

"This is clearly the best side since United were playing for Ferguson," former striker Saha – founder of Axis Stars, a social networking platform for players and coaches – told Omnisport.

"More confident and clearly more balanced even if I think the defence needs more.

"Mourinho is a great manager and he has built his team to compete and play the way United fans around the world are craving for."

Lukaku and Matic have made the seamless transition to Old Trafford after arriving in the off-season to reunite with Mourinho.

A £75million signing from Everton, Lukaku has scored three goals in as many matches, while former Chelsea midfielder Matic has provided protection and grit to United's starting XI, allowing Paul Pogba to flourish in a more advanced role.

"I'm not surprised that they play like this as they did really well last season without playing that good but the basics were found back fairly soon by Mourinho," said Saha, who won two Premier League titles and the Champions League during his four years at United.

"This season is for me important [for] the adaptation of Lukaku and Matic. A player like [Henrikh] Mkhitaryan needs space and people offering him options, from that he will pick the right pass.

"Signing Matic was important. He creates an element of security and confidence that bring the most talented players to express their quality going forward.

"I think it's great that Pogba can balance it as well and get this in his game. This United side will be terrifying."