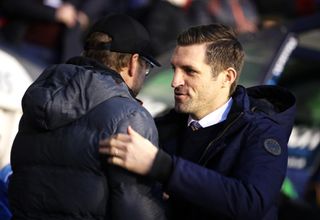 Shrewsbury manager Sam Ricketts has every sympathy with Liverpool counterpart Jurgen Klopp after the German announced he would be “playing the kids” in their FA Cup replay at Anfield.

Having squandered a 2-0 lead to draw 2-2, the runaway Premier League leaders now face an unwanted second fixture against the League One side which will interfere with the club’s scheduled winter break.

Liverpool were not supposed to have a match between February 2 and February 14 but now have to host the replay on February 4.

And as Klopp has been a huge critic of the packed schedule and the demands it places on players, he has no intention of fielding his first-team stars.

List of Teams to get a better result than Town against Liverpool this season…— Shrewsbury Town FC (@shrewsweb) January 26, 2020

While that may play into Shrewsbury’s hands, Ricketts can see his point.

“I fully understand Liverpool’s position, they are fighting on all fronts for trophies and every three days they are there to get shot at,” he said.

“This was our cup final and we will have another one at Anfield, whereas Liverpool it is just another day.

“I can’t read too much into it, we’ll see nearer the time.”

While the replay may be just another day for Liverpool, for Shrewsbury it is enormous both from a financial and prestige point of view.

The Shrews were well worth the draw at home.

“I saw the scorelines and I was thinking ‘4-0 Man City, 6-0 Man United…hold on a minute there haven’t really been any upsets here so we best try to do something,’” added Ricketts.

“What I was really hoping for at 2-0 down was to maintain belief in the game-plan and maintain our belief in what we were trying to do in the game and hope something went our way and it did.

“Once the penalty went in it was little bit of a free-for-all to be honest. If we had won it then obviously it would have been (his best day as manager).

“It was there to be won but we drew and we thoroughly deserved at least a draw and I take a lot of satisfaction out of it.

“I am just delighted we played our part because the FA Cup is magical for sides like us. We’re a club that likes to punch above our weight and we will continue to try to do so.

“The first club to do safe-standing behind the goal, we do things nicely and it is a good club, well-run.”