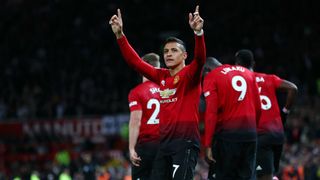 Alexis Sanchez said Manchester United are flourishing in attack and defence thanks to Ole Gunnar Solskjaer, though he insisted the players are the same with the caretaker manager as they were with Jose Mourinho.

Solskjaer replaced Mourinho in December and the former United striker has overseen seven successive victories in all competitions - six in the Premier League.

There were reports of dressing-room unrest prior to Mourinho's sacking amid a fractured relationship with star midfielder Paul Pogba.

But Pogba and United are now thriving - the Red Devils defeating Brighton and Hove Albion 2-1 on Saturday to be level on points with fifth-placed Arsenal and only four adrift of third.

Sanchez, who has been ravaged by injuries but could start Friday's FA Cup showdown against former club Arsenal, revealed Solskjaer's message to the squad.

"The players are the same with Ole Gunnar Solskjaer as they were with Mourinho," Sanchez told the Mirror. "But now we are having more ­success in attack and we are defending better. The fact he has so much ­history with this club opens the way a lot when he speaks.

"His philosophy is to touch the ball a lot, to control the game and to score goals. You can tell that his position on the field as a player was as a forward, but he still wants us to take good care of our penalty area too.

"That's the way you get better results. The only thing the ­manager told us was that we could improve the situation ourselves. He said that everything ­depended on us and it was in our own hands to climb the table."

Sanchez added: "In the end, results in football make the difference and so we are happier than we were before.

"It's not only on the pitch. In the stands, I see an even better atmosphere at Old Trafford. The fans trust us more and that's very positive for ­everyone. It helps you to keep on ­improving."