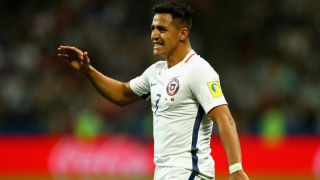 The Chile international has been named in the starting line-up by Jose Mourinho for the meeting with the League Two side at Huish Park.

Sanchez, who completed his move from Arsenal on Tuesday in a swap deal involving Henrikh Mkhitaryan, is expected to line up on the left of the United attack, with Juan Mata on the right and Marcus Rashford as the central striker.

Mourinho promised to name a strong side for the match and he has been true to his word, with United's fearsome forward line supported by a midfield that includes Ander Herrera, who is making his 150th appearance for the club, Scott McTominay and captain Michael Carrick.

Carrick is making his first appearance since the EFL Cup win over Burton Albion in September, after which he was diagnosed with an irregular heart rhythm.

Sergio Romero is in goal and Matteo Darmian, Victor Lindelof, Marcos Rojo and Luke Shaw make up the back four. Highly rated youngster Angel Gomes is among the substitutes.

David de Gea, Paul Pogba, Phil Jones and Antonio Valencia have all been rested, while Marouane Fellaini and Daley Blind have not been risked as they work to regain full fitness.

Zlatan Ibrahimovic and Eric Bailly are still out of action.