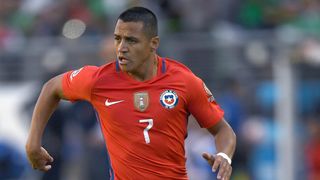 Confederations Cup opponents Germany decided to rest their biggest stars for the upcoming tournament but South American champions Chile opted for a strong side.

While Arsenal manager Arsene Wenger would have preferred to see Sanchez rested following consecutive appearances at the 2014 World Cup and the Copa America in 2015 and 2016, Chile boss Juan Antonio Pizzi had no hesitation including the 28-year-old in his 17-man squad, initially made up of European-based players.

Domestic-based players are yet to be named.

Chile's joint all-time leading goalscorer – alongside Marcelo Salas with 37 – has netted 23 Premier League goals this season and 28 in all competitions.

Vidal is also in the squad after helping German giants Bayern Munich to a fifth successive Bundesliga crown.

Despite a forgettable debut campaign in the Premier League, maligned Manchester City goalkeeper and Chile captain Claudio Bravo will make the trip to Russia, along with Gary Medel, Mauricio Isla, Charles Aranguiz and Eduardo Vargas.

The Confederations Cup kicks off on June 17, with Chile drawn in Group B alongside Germany, Cameroon and Australia.

Chile open their campaign against Cameroon in Moscow on June 18.

Hosts Russia, Portugal, Mexico and New Zealand are in Group A.