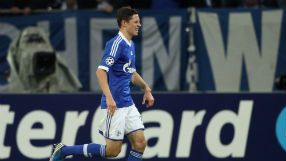 Draxler, who scored one goal and earned a penalty that added another for Schalke, was taken off early in the second half after he snapped a bone in his lower arm when he was brought down for the spot kick.

The 19-year-old Germany international, who was Schalke's best player on the pitch, had levelled in the 26th minute for the hosts who conceded a 90th minute equaliser.

"He is still in hospital," team doctor Thorsten Rarreck told reporters. "He is doing well under the circumstances."

The draw put Schalke on four points from two matches and in second second place behind Arsenal, who have six.