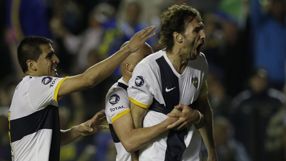 Being held by San Martin, who were down to 10 men from the 39th minute, meant that Boca lost the chance to join Newell's Old Boys at the top of the standings, increasing fans' disapproval of coach Julio Cesar Falcioni.

At the end of the match, fans jeered Falcioni and chanted the name of Juan Roman Riquelme, the former Argentina playmaker who ended his career with Boca prematurely at the end of last season and is known to be critical of Falcioni's tediously cautious tactics.

"I won't say anything about that, it's the fans having their say," Falcioni told reporters.

Newell's, who drew 0-0 at Tigre, lead with 19 points from nine matches at the halfway stage in the "Inicial" tournament in the first half of the season with Boca, Racing Club and Velez Sarsfield on 17.

Midfielder Mauro Bogado put San Martin ahead with a 33rd-minute penalty awarded against the 39-year-old Schiavi who was lucky, according to media reports, not to have been sent off.

San Martin were reduced to 10 men when striker Gaston Caprari was shown the red card for handball after blocking a goalbound shot from Uruguayan Santiago Silva, but Boca captain Schiavi hit the penalty wide.

Schiavi, who has won league and South American titles with Boca and had a belated, brief four-cap Argentina career in 2009 under Diego Maradona, made amends just before half-time when he equalised with a low shot from outside the box.

Boca's arch-rivals River Plate, struggling in mid-table since their return to the tip flight from shock relegation last year, recovered from their 1-0 home defeat by Racing Club last weekend by crushing title holders Arsenal 4-0 away.

River are 10th with 12 points after a brace from striker Rodrigo Funes Mori helped the team ease the pressure on beleaguered coach Matias Almeyda.

Almeyda has been under fire after mixed performances from a River team he has tinkered with week in week out, seeking but never quite finding the right balance.

Arsenal, who won their first league crown in June, have slumped to four successive defeats after a good start to the season and lie 14th with 11 points.