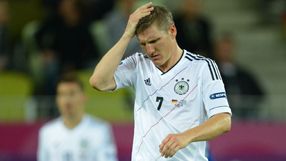 Experienced holding midfielder Schweinsteiger has missed some training sessions in the past few days due to an ankle injury picked up earlier in the year and his performance in the tournament has so far been below expectations.

"He has a problem and obviously it is best when no player has a problem," captain Philipp Lahm told reporters on Sunday. "It is OK when you miss a training session but when you need to sit out several then it is not that easy."

"But I am not too concerned. Bastian knows his body inside out, he is experienced and he will be able to deliver on Thursday."

Three-time European champions Germany will meet either England or Italy, who play later on Sunday, for a place in the final on July 1 in Kiev.

"We need fit players, so much is clear," said Lahm when asked whether Schweinsteiger would play even if not fully fit.

"We cannot have three or four percent missing. We have depth in the squad and that gives you peace of mind. But clearly it would be good if Bastian Schweinsteiger could play on Thursday," said Lahm.

Germany made four changes to their line-up in their 4-2 quarter-final win over Greece compared to their last group game against Denmark but looked even sharper.

Preparations for their fourth straight semi-final in a major tournament have also been hit by revelations that a mole has been leaking the lineups for group games and their quarter-final match against Greece to media hours before the start.

Coach Joachim Low has said it was none of his players but did not rule out the possibility that the 'Deep Throat' could be someone they talked to, from friends and wives to maybe agents.

Lahm said the issue had again been raised with the players and that the culprit was causing some damage.

"Everyone should be aware that it is normal for a player to tell his wife, girlfriend or agent whether they will play once they find out but you cannot reveal the lineup. You cannot do that."

"It is sad when this thing comes out. The whole nation is behind us and it is not an advantage when it is leaked hours before. The one who released it has a problem. He has not understood how this works."

"But we will not deploy a spy," he said.