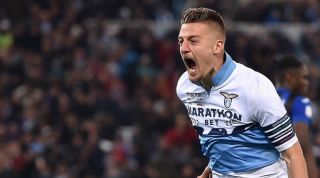 The Serbia international has been linked with a move to Old Trafford this summer, while PSG have also expressed interest.

Corriere dello Sport reports that the midfielder’s agent Mateja Kezman is yet to meet with the club to present any offers he has received.

Lazio president Claudio Lotito is demanding €100 million for the 24-year-old, a price that could ward off any suitors.

Milinkovic-Savic is said to be ready to leave the club to test himself in the Champions League.

United, who will only play Europa League football next season, could raise the funds required to convince the Serie A side that they should sell, easing the possible departure of Paul Pogba.

Milinkovic-Savic had a quiter 2018/19 after a breakthrough campaign the season prior, and produced five goals and three assists in 31 Serie A appearances.

RECOMMENDED Manchester United's mad 1999 trip to Australia: all-nighters and dirty Dwight Down Under