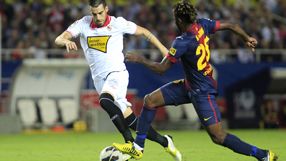 Sevilla failed to qualify for Europe last season and are one of many top-flight sides struggling to meet debts to the tax authorities while remaining competitive with richer rivals.

"We won't sell Negredo unless there is a market-busting offer," Del Nido told a news conference presenting Bosnia midfielder Miroslav Stevanovic, whose signing was completed on Wednesday.

"Neither Negredo, nor Rakitic, Medel or Reyes," Del Nido added.

"I can also say that there are offers for seven players in the squad and they have all been rejected.

"In concrete terms, we rejected an offer of 16 million euros for Negredo. If there are no market-busting offers we will not sell anyone."

Del Nido said Sevilla was among five clubs that owed the least to Spain's tax authority, which has started to crack down on teams who have fallen behind in their payments.

He also said coach Michel was not about to be sacked despite seeing his side slip to 14th in the La Liga standings after a poor run.

"The coach's job is not at stake in Saturday's game against Osasuna while we still see in him the capacity, the strength and the knowledge to get the team out of the situation they are in," Del Nido said.

"The responsibility is pyramid shaped and it stops with me. We have to seek solutions and we will take steps to find ways of getting out of this situation."