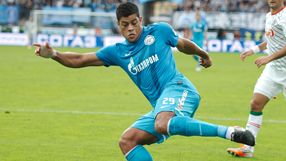 Brazil coach Mano Menezes could do worse than look to Eastern Europe for inspiration as Ukraine's Shakhtar Donetsk proved by outplaying Juventus in their Champions League match on Tuesday.

Brazil have been reluctant to pick players based with clubs in Eastern Europe, particularly 2006 World Cup coach Carlos Alberto Parreira, who emphasised the importance of playing in one of Western Europe's traditional leagues.

Zenit St Petersburg forward Hulk (pictured) and Dnipro Dnipropetrovsk midfielder Giuliano are the only Eastern Europe-based players in the squad for friendlies against Iraq and Japan in Europe this month.

However, Shakhtar's Willian, Fernandinho, Alex Teixeira and Luiz Adriano showed there is no reason why they cannot flourish at international level after pulling the Serie A champions' defence apart at the Juventus Stadium on Tuesday.

The Ukrainian champions enjoyed almost 60 percent of possession but had to settle for a 1-1 draw after hitting the crossbar in stoppage time.

Willian, 24, was the pick of the quartet and his ability to spray passes nonchalantly around midfield with unerring accuracy makes him a rare commodity in Brazilian football.

The dynamic Fernandinho, a defensive midfielder with excellent passing and a powerful shot, is another rare breed for Brazil, where players in his position are brought up to concentrate on the destructive side of their role.

Teixeira's speed and trickery also impressed on the right of midfield while Luiz Adriano was a menace in attack.

Yet none of them are well known in their homeland and their combined international experience has been limited to two appearances last year by Willian and five for Fernandinho, with Luiz Adriano and Teixeira still uncapped.

Despite Willian, Fernandinho and Luiz Adriano helping Shakhtar to their UEFA Cup win three years ago there is no lobby to get them into the national team from the Brazilian media, while home-based players are given persistent backing from media in their part of the country.

Shakhtar have a total of nine Brazilians in their squad, a deliberate policy implemented by coach Mircea Lucescu when he took charge in 2004.

Despite the difficulties of adapting to life in a Ukrainian mining town, the policy has flourished with Shakhtar winning six league titles under Lucescu plus the UEFA Cup.

"Willian is already a well-known player," said Lucescu after Tuesday's game. "He is a great talent, but other players such as Alex Teixeira were also outstanding ... the whole team played well.

"This team has grown together, I have 23- and 24-year-olds who have been playing in the same squad since they were 18.

"I built this team and we are not afraid to play anywhere."

Willian, who joined Shakhtar from Corinthians as a 19-year-old, said in an interview with the Terra website last week he recognised it was difficult to get a call-up playing in Ukraine.

"Ukrainian football does not have a high profile, but I hope to get a sequence of games," he said. "I played two games, coming on in the second, but I didn't get a chance to show what I am capable of."