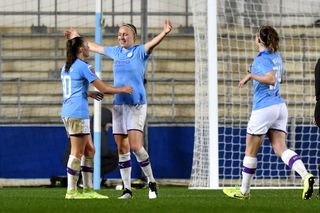 German striker Bremer took her goal tally to nine in eight league appearances, before Gemma Bonner got City’s third. The visitors replied in the last minute through Georgia Stanway’s own goal.

Bremer opened the scoring 18 minutes into the game with a right-footed shot from close range and doubled the advantage in the 53rd after being set up by Laura Hemp, who had pounced on a loose ball.

City’s third goal came in the 64th minute when former Liverpool captain Bonner reacted fastest to get on the end of Caroline Weir’s superb free-kick.

Despite starting with high intensity, almost scoring on 13 seconds courtesy of a powerful Hannah Cain strike, Everton struggled without top scorer Chloe Kelly and only had Stanway’s late own goal to show for their efforts.