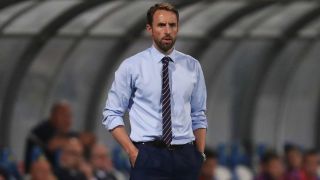 Gareth Southgate felt England were rewarded for staying patient after a late flurry of goals secured a 4-0 victory over Malta in World Cup qualifying.

Harry Kane scored twice in the Group F fixture on Friday, the Tottenham striker's double coming either side of goals from defender Ryan Bertrand - his first at international level - and substitute Danny Welbeck.

However, England - who next face nearest rivals Slovakia on Monday - were frustrated by their hosts in the first half at the Ta' Qali National Stadium before Kane finally put them ahead in the 53rd minute.

Southgate was pleased to see his players remain calm against stubborn opposition, an approach that paid off when they scored three goals past a tired Malta side in the closing stages.

2 - registered just two shots on target against Malta in the first half; one in the 4th minute and the other in added time. Stuck. September 1, 2017

"We could have been two goals up very early on. We knew Malta defended really deep and would be so difficult to break down and create chances against," he said.

"But part of keeping the ball is tiring the opposition and your goals end up coming late. That's what we have a bench for.

"Of course people will have wanted the goals earlier but we've won 4-0 and that's all that matters.

"What pleased me was that it can be a difficult environment. You're expected to win comfortably and get your goals early.

"We stuck with the plan and didn't panic. We kept playing our football and got the goals in the end.

"I've played in England games where it's happened [the team has become anxious]. We talked all week about staying calm if we haven't got the goals early, and that's exactly what we did."

Didn't like August anyway!Solid performance and good result away from home. September 1, 2017