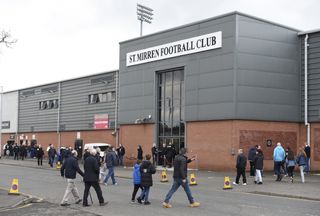 St Mirren’s Premiership match against Hibernian on Saturday will go ahead despite Covid-19 issues ruling out the Buddies’ three first choice goalkeepers.

The Paisley club confirmed earlier in the week that number one Jak Alnwick had tested positive for coranvirus before confirming on Thursday night that a second unnamed player had also contracted the virus.

A statement from The Joint Response Group confirmed that a second keeper – Dean Lyness or Peter Urminsky are the other two keepers in the squad  – had also tested positive.

While the third keeper had tested negative he will also have to sit out the match as a precautionary measure, leaving Saints boss Jim Goodwin to play a youth keeper or go for an emergency loan.

The statement read “The Joint Response Group has been in dialogue throughout the day with the Scottish Government’s medical advisers  to establish the facts and implications of St Mirren’s positive COVID-19 tests.

“The club informed us that two goalkeepers (Goalkeeper A and Goalkeeper B) have tested positive for COVID-19, confirmed by follow-up NHS tests.

“As a result, both players will be excluded from the squad for 10 days and pending the return of negative tests.

“The Scottish Government’s Clinical Adviser on COVID & Sports, in conjunction with Greater Glasgow and Clyde Health Board Health Protection Team and Health Protection Scotland, have confirmed to the JRG that there is not enough evidence to support postponing tomorrow’s Scottish Premiership fixture between St Mirren and Hibernian.

“As a result, the Scottish Professional Football League – as the league body with jurisdiction – have confirmed that the game will go ahead as planned.

“All St Mirren players will be retested on Sunday ahead of their midweek Scottish Premiership fixture against Celtic.

“In addition, after analysis of club GPS data, the local health board’s Health Protection Team also consider a third goalkeeper, Goalkeeper C, to be at potential risk of transmission given close proximity to team-mates.

“To mitigate the potential that Goalkeeper C – who returned a negative test – may have the virus in incubation, he will also be excluded as a precaution on the advice of the local health protection team, public health experts and government’s clinical advisers and be retested on Sunday.”

Neil Doncaster, SPFL chief executive said: “I understand this is an extremely challenging situation for St Mirren but it demonstrates that the current testing regime is working, by detecting positive COVID-19 tests expeditiously, enabling the appropriate health boards to implement test and protect protocols that isolates those individuals who test positive, but allow football to continue safely and with confidence.

“We have been in dialogue with the club throughout the day and are grateful to the Scottish Government’s Clinical Adviser on COVID & Sports for joining today’s JRG meeting to provide reassurance, clarity and recommendations for consideration based on expert clinical advice.”

The Paisley club released a statement which read: “St Mirren Football Club can confirm that tomorrow’s match against Hibernian will go ahead.

“The club received very late confirmation from the SPFL this evening following a meeting between the Scottish Government and Joint Response Group.

“The club have been informed that due to positive test results and track and trace protocols, our goalkeepers, Jak Alnwick, Dean Lyness and Peter Urminsky are all ineligible for tomorrow’s match.

“With less than 24 hours’ notice our only option is to attempt to bring in an eligible goalkeeper on loan and the club are working hard to do so and we will update fans as soon as possible once a deal is complete.

“The club has rigorously followed all protocols put in place by the Scottish Government and the SPFL/SFA Joint Response Group and we will continue to do so.

“This is a very difficult situation for all concerned and we will continue to discuss with the SPFL how cases like this are dealt with in the future but we can assure St Mirren fans that we are doing all we can to make sure that we have a strong team for tomorrow’s match.

“The club will not be issuing any other statement on this matter.”