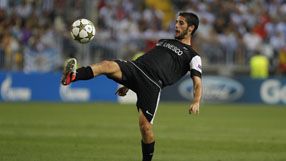 The 20-year-old playmaker is establishing himself as the driving force at the heart of Manuel Pellegrini's side and he was voted by coaches as La Liga's 'revelation player' of last season.

Malaga are top of Group C with two wins from two games, holding a two-point lead over misfiring Milan in second place.

Youth international Isco was named in Vicente del Bosque's provisional Spain squad for Euro 2012 and has been a key figure in the Qatari-owned club's impressive start to the season.

He is their joint top scorer in the Champions League with two goals and netted for the second time this season in La Liga when Malaga overcame Valladolid 2-1 on Saturday to stay third in the table.

Coach Pellegrini has fashioned a side similar to the Villarreal team he led to the last four of the Champions League as debutants in 2005/06 - they are confident in possession and difficult to score against.

Malaga defeated both Anderlecht and Zenit St Petersburg 3-0 earlier in the competition and boast the meanest defence in La Liga having let in just five goals in eight games.

"We aren't scared of Milan," winger Joaquin told the local newspaper Diario Sur. "If we win the three points will almost assure us of a place in the last 16.

"It's the most important fixture in the history of the club."

Seven-times European champions Milan are still struggling to come to terms with the sale of influential players like Zlatan Ibrahimovic, Thiago Silva and Antonio Cassano and have suffered a dreadful start to the season.

They were held 0-0 at home by Anderlecht in their opening Group C game and scraped a 3-2 win in St Petersburg earlier this month.

Milan are down in 15th place in Serie A after a 3-2 defeat at Lazio on Saturday continued their worst league start in seven decades.

"Five losses in eight games is a lot, far too much," Milan vice-president Adriano Galliani told the club's television station.

Galliani was again pressed on Saturday about the future of under-fire coach Massimiliano Allegri.

"Everyone keeps asking me," he said. "The coach stays in his job and he has to try and make sure the team put points on the board. There is no desire whatsoever to change the coach."