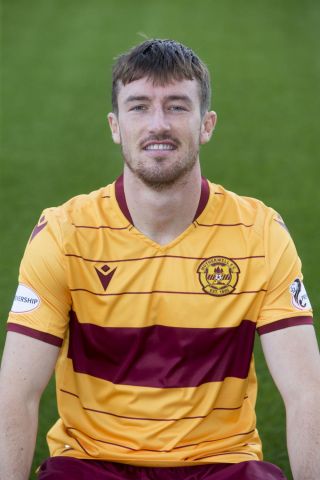 Long has scored six goals in his last five games after establishing himself as Motherwell’s main centre-forward following his summer move from Blackpool.

Motherwell are the 24-year-old former Everton and Burnley player’s eighth club and Robinson believes he can thrive with a bit more stability.

“We have put an arm round him and hopefully given him a home,” Robinson said. “We are trying to extend that and I think we are very close to doing something.

“We give people a platform to play football. Chris has sort of bounced about and not really found a home.

“Me and my coaching staff have a lot of time for him. I think his agent is very sensible, he sees it as a place to put him in the shop window.

“We know we won’t keep Chris forever if he keeps doing what he’s doing but for me he needs a little bit more time to establish himself and to build his confidence.”

One player who has benefited from stability at Fir Park is Liam Grimshaw. The former Manchester United trainee is in the third year of his second spell at the club and recently signed a two-year extension.

Grimshaw said: “The last few times I have re-signed it has only been a year so I am glad it’s two years and I can really focus on cracking on and improving, and I know the club will continue to go forward as well.

“I love it here, love the club and living in the area. It’s important, if you are settled it really gives you the platform to improve.”

Motherwell take on Aberdeen on Wednesday night aiming to hang on to third place in the Ladbrokes Premiership.

“We go there with absolutely nothing to lose,” Robinson said. “I have total respect for Aberdeen and the job Derek (McInnes) and Tony (Docherty) have done up there.

“They have consistently finished in the top two and three and competed with the bigger teams in the league and got to cup finals on a regular basis.

“Their record is superb but we have made a bit more competition of it this year. We are right up there and we have to go there with every confidence we can get a result.

“The players have earned the right to be discussed in the top half of the table. We have certainly proved that so far.

“There is a long way to go and a lot of things can change but we have to maintain what we did before. We got back to that on Saturday, doing the simple things very well.

“If we can do that and compete against Aberdeen, then I believe we have the players to win football matches.”