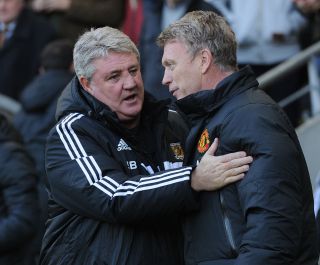 David Moyes has saluted Steve Bruce for the “incredible” job he has done at Newcastle.

Bruce is currently proving his detractors and those unimpressed by his appointment wrong with the Magpies soaring towards the top half of the Premier League table.

Moyes takes his West Ham side to St James’ Park on Sunday looking to end Bruce’s unbeaten run in the league since the restart, but he knows it will be a tough task.

“When he took the job there were so many doubters but if anything, Steve has done an incredible job and anyone who doubted him has been proven wrong because he has shown the qualities he has got,” said the Hammers boss.

“Newcastle have looked a very strong side, and an improving side who we will need to play well against.”

Moyes may have to deal with a familiar face in the shape of Andy Carroll, who is in line to start for Newcastle with Joelinton a doubt.

He managed the injury-prone but dangerous frontman during his first spell in charge at West Ham.

“Indeed, I know all about Andy,” he said. “He has been a big player and I have got no doubt that if he doesn’t start, he will play some part. We’ll have to deal with him.”

Moyes will be without Brazilian playmaker Felipe Anderson, who as a hamstring problem, and will check on the fitness of Mark Noble, Arthur Masuaku and Sebastien Haller.

Haller’s club record £45million move from Eintracht Frankfurt has come under scrutiny after the German club complained to FIFA over a missed payment.

A FIFA statement read: “We can confirm that we have received a claim from the German club Eintracht Frankfurt against the English club West Ham United.

“The matter is currently still being investigated and consequently we cannot provide any further comments.”

West Ham are understood to be confident the issue will soon be resolved, while Moyes denied that Haller’s absence from the team since the resumption had anything to do with the matter.

“There’s no connection because Seb has been injured,” he said. “The players have nothing to do with what is going on between the clubs or discussing money. The player is only involved in his contract, nothing else.”