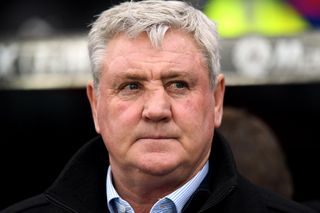 Steve Bruce is ready to roll the dice as he attempts to get Newcastle’s season back on track.

The Magpies welcome Burnley to St James’ Park on Saturday having suffered back-to-back defeats at Arsenal and Crystal Palace and knowing that their seven-point cushion over the bottom three will soon evaporate if they do not return to winning ways.

Bruce’s men have scored only 24 goals in their 27 league games to date this season and none in the last three, and with their front players having contributed only four of those between them, the pressure is on to take a more pro-active approach.

The head coach, who could abandon his three-man defence and throw fit-again striker Dwight Gayle back into the fray this weekend, said: “We haven’t created enough and done enough and whereas we were a threat on the counter-attack, that has just waned over the last few weeks for whatever reason.

“We have had a few lapses defensively, but we have to improve in the final third. The front three haven’t scored enough – that’s not a criticism just on them. We have to create a few more chances for them, get the ball forward more quickly.”

If results on the pitch in recent weeks have not been positive, the team spirit within the camp remains strong with Argentinian defender Federico Fernandez and Paraguayan forward Miguel Almiron this week hosting a barbecue for players and staff at the training ground to mark their birthdays.

Bruce said: “The South Americans, it’s meat for birthdays, not cakes like we have. It’s a good job they didn’t have it on the Monday, there was snow everywhere.

“It was still cold, but fair play to them. We had that much steak going on, it was incredible.

“Everyone is disappointed (with recent results), but the morale is pretty decent.”

Bruce could have midfielder Jonjo Shelvey as well as full-backs Emil Krafth and Javier Manquillo back amongst the fold after injury, but loan signing Valentino Lazaro is suspended following his red card at Selhurst Park and central defender Ciaran Clark is likely to miss the rest of the season with ankle ligament damage.

Bruce said: “He’s obviously damaged ankle ligaments badly, so the decision is whether to operate or not. I think we’ll be, in the next 48 hours, deciding which way we’re going to go.”