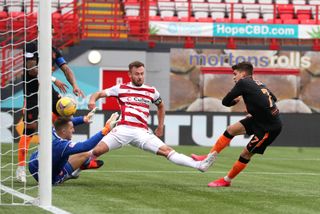 Steven Gerrard admits Ianis Hagi has been hit and miss this term but hopes the Rangers ace is back on track after finding the target at Hamilton.

The Ibrox boss was convinced to splash out £3million to make Hagi’s Gers move permanent this summer after last season’s impressive loan spell.

But the 21-year-old son of former Barcelona and Real Madrid superstar Gheorghe has failed to shine quite so brightly so far this campaign.

He was hauled off early against Aberdeen and St Johnstone before dropping to the bench for last week’s win over Kilmarnock.

However, a calf injury suffered by Cedric Itten offered the former Genk playmaker a reprieve against Accies and Hagi took it, ramming home the opener in the Light Blues’ 2-0 win after a Kemar Roofe header had bounced back off the crossbar.

While some fans have started to doubt whether this summer’s purchase was money well spent, Gerrard is convinced Hagi will soon prove his value.

He said: “We know the talent of Ianis. We signed him in the summer because we believe in him.

“He has been a little bit hit and miss so far but that was a strong performance from him on Saturday.

“Ianis got his goal and that will help him.

“Now he goes away and plays for Romania and we hope he comes back healthy.

“The players are giving me selection headaches and that is what I want.”

Rangers have eight players away on international duty this week, but Itten is not among them after his injury cost him the chance of a Switzerland call-up.

But Gerrard is hopeful the recent recruit from St Gallen will be ready to return to domestic duties against Dundee United in a fortnight.

“Cedric has a calf injury and should have had a scan by now,” he said. “We are waiting on the reports, but the doctor’s first look at it says a couple of weeks.

“He is out of the international games and it’s a shame for him.

“His performance against Kilmarnock showed real good signs and I wanted to start him again.

“Unfortunately that was taken away from me but hopefully he will be ready for Dundee United.”

Meanwhile, Accies boss Brian Rice has praised youngster Reegan Mimnaugh after the 18-year-old returned to the Hamilton starting line-up for the first time in more than a year.

He said: “First half he was a wee bit in awe of Rangers and rightly so because he has not played much and I have thrown him in a match against Rangers.

“But second half he was more like the Reegan I know. Young Kyle Munro too made his debut off the bench. He was playing junior last year. This will be a good experience for both.”