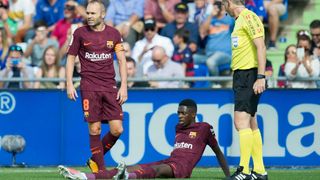 The hamstring tear which has resulted in a four-month layoff for Ousmane Dembele could have been influenced by the stress of his club-record move to Barcelona, according to the doctor overseeing his recovery.

Dembele enjoyed an encouraging start to life in a Barca jersey in his first couple of matches, but the 20-year-old was forced off in pain in his full LaLiga debut, a 2-1 win at Getafe on September 16.

The winger attempted a back-heel near the corner flag in the first half and felt a problem in his hamstring.

It was later confirmed to be a tear that will keep him out until January and, although Dembele recently said in a social media post that he was confident of returning before that, Dr. Sakari Orava – the muscular expert keeping tabs on him – is eager to stick to the original target.

"For the moment, the recovery of Dembele is going well," Orava told Mundo Deportivo.

"I am in permanent contact with Dr. Pruna, who is in charge of sending me the reports of the controls that are applicable to Dembele, and for now everything is correct.

"He, like all young boys at his age, is very optimistic, but it is preferable to be cautious [in terms of rehabilitation].

"Maybe it was a sin of youth not to say that he felt discomfort in that area beforehand. The pressure that he has been exposed to after his transfer to the club could also influence [the injury]."