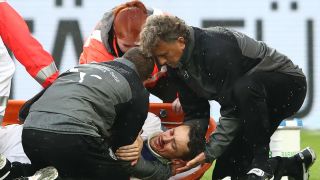 The 32-year-old jumped for a header in the Wolfsburg penalty area in the closing minutes of the Bundesliga encounter and was accidentally struck by Casteels' knee.

Gentner received lengthy treatment before being carried off on a stretcher and was taken to hospital for further tests.

The club have since confirmed the extent of the midfielder's injury, who will undergo an operation in the coming days.

"Extensive examinations revealed that Christian Gentner had suffered breaks to his lower and lateral eye socket, his nose and his upper jaw," Stuttgart said in a statement.

"The 32-year-old will undergo surgery over the next few days and is expected to make a complete recovery."

Stuttgart sporting director Michael Reschke said: "It's a cruel blow for Gente, his family and for us. The most important news, though, is that he will make a full recovery.

"We will give Christian all the time he needs to get fully fit again. We are delighted that we will have our captain back on board again.

"Christian is enormously important for us, both on as well as off the pitch. In the four Bundesliga games we've played thus far, he has impressively proven his exceptional qualities."

Stuttgart held out for a 1-0 win that takes them to six points from four matches.