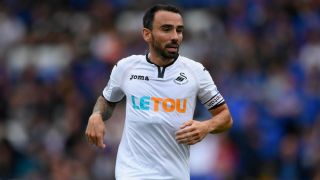 Swansea City midfielder Leon Britton has announced he will retire at the end of the season, with the club seemingly destined for relegation to the Championship.

Britton, 36, joined the Swans from West Ham - initially on loan - in 2002 and has made 536 appearances in a hugely successful spell that saw the club progress from the fourth tier to the Premier League, winning the League Cup and appearing in the Europa League during a six-year stay in the top flight.

That stint looks set to end on Sunday, with Swansea three points adrift of safety, and so too will Britton's professional career.

"I have decided that this year will be my last as a Swans player," the former captain and caretaker manager said.

"It's a sad day obviously, but this season has been very difficult for me. I have had a lot of niggling injuries and I haven't played a lot when I have been fit.

"I have pushed my body through a lot, playing with injuries and injections and what have you over the years, and I think now is the right time.

"I probably could play on, but this year, on the first day of pre-season, I did my calf in the warm-up. That kind of set the tone for the season.

"I don't want to spend another year in the physio room and not playing. If I am being honest, it's been difficult this year and my body is telling me to stop."

While Britton has agreed to stay on as a club ambassador, another Swansea stalwart, Angel Rangel, is set to depart.

The 35-year-old defender plans to continue his career elsewhere.