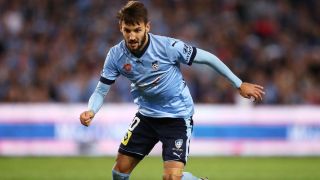 Sydney FC star Milos Ninkovic has signed a one-year deal to stay with the A-League champions, in a huge boost to the Sky Blues.

The Serbian midfielder, 32, was the standout player in the competition in 2016-17, winning the Johnny Warren Medal.

Despite speculation he could leave Australia, Ninkovic's new deal – which lifts him to marquee status at the club – was confirmed on Tuesday.

"I love this club, I love this city, I love my team-mates and I love our wonderful members," he said.

"This season has been the most special of my career and long may it continue.

"We have a fantastic squad and we want to stay together and continue to create history."

Ninkovic was Sydney's hero in the Grand Final, netting the winning penalty in a shoot-out success against Melbourne Victory on Sunday.

He enjoyed a stunning campaign that included scoring nine goals and setting up 11 others.

Sydney coach Graham Arnold said: "Milos has proven to be a class above this season and his understanding with the rest of our strike force will only continue to flourish.

"It is a huge tribute to Sydney FC, our staff and the culture we have at the club, that after such a fabulous season, he has agreed to come back for another year.

"It is an exciting time to be a Sydney FC supporter with the AFC Champions League coming up and a chance to further assert our command on Australian football."