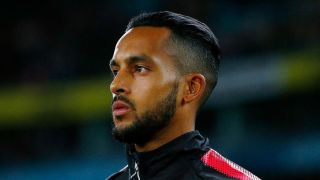 Walcott broke through with Southampton as a 16-year-old in the Championship, back in 2005, before Arsenal signed him the following January for £12m. Walcott famously went to the World Cup in Germany without a Premier League minute to his name.

In a 12-year career at Arsenal, the forward won three FA Cups and scored over 100 goals for the North Londoners before departing in January 2018 to make way for Pierre-Emerick Aubameyang. Walcott has featured sporadically at Goodison Park since and is now considering his options ahead of this season.

Southampton are one club particularly interested in taking the 31-year-old back, with Ralph Hasenhuttl said to be keen on strengthening his options in attack. The Saints are set to split Walcott's wages 50/50 with the Merseyside outfit.

A number of other clubs expressed interest in Walcott but it looks now as if he is definitely going to Southampton. Crystal Palace were interested in the winger as depth behind Andros Townsend while fellow Londoners Fulham apparently also considered a move.

Walcott did appear off the bench for Everton at the weekend in what could become his final appearance for the club. Walcott looks likely to move permanently next summer - should he impress at St. Mary's, it may well be back to Southampton.