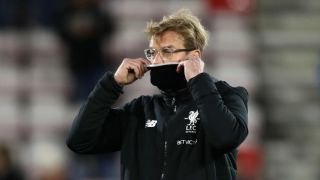 Veteran coach Jupp Heynckes has led an impressive revival for the Bundesliga champions since Carlo Ancelotti's sacking in September but a long-term appointment remains on the agenda for 2018-19 and beyond at the Allianz Arena.

Klopp was a thorn in the side of Bayern during his celebrated tenure at Borussia Dortmund, winning back-to-back Bundesliga titles in 2010-11 and 2011-12.

He completed the domestic double by hoisting the DFL-Pokal in the latter season.

From around that time, Bayern have regularly poached top playing talent from Dortmund but Klopp's representative Marc Kosicke insists BVB fans need not worry about another of their heroes taking up residence in Bavaria.

"There is nothing there," he replied when asked by Sport1 whether rumours linking Klopp to Bayern had any weight behind them.

Klopp is into his third year at Liverpool and just shattered the club's transfer record by bringing in centre-back Virgil van Dijk from Southampton.

The 50-year-old has four-and-a-half years remaining on his Anfield deal.