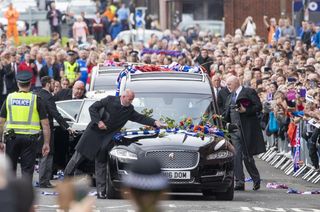 Rangers stars past and present were among thousands of mourners who gathered in Glasgow for the funeral of the club’s former captain Fernando Ricksen.

The ex-Holland international died last week at the age of 43 following a six-year battle with motor neurone disease.

Huge crowds lined the streets outside Ibrox to pay tribute to Ricksen as the cortege drove past the stadium on the way to his funeral, which was held at Wellington Church in Glasgow’s west end.

The Rangers first team stood at the front door of the stadium to join the thousands of supporters paying their respects to Ricksen as the cortege paused outside.

Ricksen’s family was greeted with applause as the cortege left, piped away from Ibrox with a bagpiper, on the way to the church.

The Dutchman’s former team-mates Michael Mols, Thomas Buffel and Nacho Novo wore black shirts with Ricksen’s surname and number two on the back as they carried the coffin into the church to the sound of applause from the crowd gathered on the street outside.

The current Rangers team were represented at the funeral by manager Steven Gerrard, his assistant Gary McAllister and goalkeeper Allan McGregor, while Celtic manager Neil Lennon, who came up against Ricksen in his playing days, was also in attendance.

A host of Ricksen’s former Rangers colleagues, including Tore Andre Flo, Neil McCann and Marvin Andrews were among the mourners, along with ex-Gers players Mark Hateley, Richard Gough, Ally McCoist and Ian Durrant.

Those at the church celebrated Ricksen’s life by singing songs and hearing stories about him.

Rangers chaplain Reverend Stuart D MacQuarrie, who conducted the service, began by offering his sympathies to Ricksen’s wife Veronika, daughter Isabella and the wider family before paying his own tribute.

He said: “We would like them (the family) to see today that Fernando, as part of your family, was loved as part of a wider family – the Rangers family.

“And in the Rangers family we like to believe that we look after our own. So you will always be welcome and hopefully you will regard Glasgow and Ibrox as your home.

“The contribution Fernando made to Scottish football can be seen in the laying down of rivalries by fans of teams way beyond Rangers.

“The massive number of wreaths, scarves and tributes from Rangers supporters, and also those from supporters of other teams – including Celtic, our greatest rivals – bear testimony to Fernando’s place in Scottish and European football.”

Club historian David Mason presented a Rangers tribute, saying: “Over the years he built up a special bond with the staff, players and most importantly the fans.

“It’s no wonder that many rallied to him in his time of need.

“Today we say goodbye to Fernando – a much-loved player but more than that a very special man. On behalf of Rangers Football Club, I say rest in peace friend, you did us proud.”

Andrews spoke on behalf of Rangers’ former players, remembering his team-mate with fondness.

“When he was diagnosed with his illness he had that fighting spirit to say ‘I will show you all’.

“And this is something that everybody here should take from. Everybody is here today to show our respects for Fernando, what a great man he is, what he’s done for Rangers Football Club, what he’s done in his football career, his personal life and family life.

“We should all take inspiration from that in whatever we are facing and going through in our lives.”