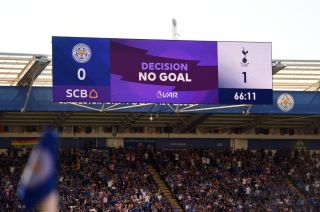 VAR played a significant part over the Premier League weekend, with decisions having important consequences for both Tottenham and Chelsea.

Here, the PA news agency looks back over the talking points caused by the technology.

A Serge of discontent

Harry Kane’s finish off the floor after he had stumbled through two challenges had given Spurs the lead before they were denied a second goal. Serge Aurier fired in midway through the second half but, after two minutes of deliberation, VAR ruled that Son Heung-min was millimetres offside and it was disallowed. Ricardo Pereira equalised before James Maddison fired in the winner with five minutes remaining, leaving Spurs manager Mauricio Pochettino to rue the VAR decision. The Argentinian claimed the decision had given the Foxes the belief they needed to go on and win the game.

Chelsea were a goal down to Trent Alexander-Arnold’s stunning strike and were further frustrated when they thought they had equalised, only to be denied by VAR. Cesar Azpilicueta fired home from close range after the ball had ricocheted around the Liverpool area. But referee Michael Oliver indicated the goal was going to be checked and Mason Mount was adjudged offside early in the move which led to the goal. To rub salt into Chelsea’s wounds, Liverpool swiftly grabbed a second goal through Roberto Firmino en route to a 2-1 victory.

Spot of dissatisfaction for Dyche

Burnley enjoyed a 2-0 win over Norwich, but the margin of victory could have been even greater. Clarets boss Sean Dyche was left baffled by two decisions from referee David Coote, first in turning down a penalty appeal when Ashley Barnes appeared to be felled by Ben Godfrey and then not showing a second yellow card to Ibrahim Amadou for a crude foul on Jay Rodriguez. “I’m a big fan of VAR but I don’t know where it lives if that’s not a penalty,” Dyche said after the match at Turf Moor. “And when I see people rolling all over the floor every week and their lad’s battered Dwight (McNeil) and then battered Jay Rod and doesn’t get a second yellow… Another day that might affect the game.”

King misses out but Cherries on top

Joshua King was denied a goal in the win over Southampton at St Mary’s which would have made their margin of victory even greater. King’s strike in the 25th minute was ruled out for offside by VAR but the Cherries were 3-1 winners anyway. Nathan Ake, Harry Wilson and Callum Wilson were on target for Bournemouth, with Southampton’s reply coming from a James Ward-Prowse penalty.