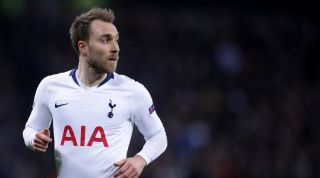 Following a statement that he was ready to move on from Tottenham, Christian Eriksen was the subject of a prolonged summer transfer saga.

The main club linked to Eriksen was Real Madrid who, along with Barcelona, are understood to be his preferred destination.

At several points over the course of the transfer window, Los Blancos' desire to sign the Dane appeared quite strong. However, Zinedine Zidane was believed to have preferred the club try and sign Paul Pogba fromManchester United – as Andy Murray explained in the lastest FourFourTwo Podcast.

Interest in Eriksen was put on the back burner by Madrid and was eventually left with no choice but to stay at Spurs.

According to The Athletic, Spurs actually received no official bids for the 27-year-old at all.

Despite no forthcoming offers from Real Madrid or Barcelona, Manchester United did express a desire to sign Eriksen – but the player is believed to have not been interested in a move to Old Trafford.

Eriksen is now in the last year of his contract and will be free to negotiate with any interested clubs in January regarding a free transfer next summer.

Jan Vertonghen and Toby Alderweireld are also into the final months of their deals and, unless Spurs tie them down before January, could be headed for the exit door as well.

Tottenham could begin a reshaping of their squad during the winter window, as Mauricio Pochettino says he seeks to start a "new chapter" in North London.

Though overall, this is believed to mean less spending on new signings and more investment in promising youth players.

Players such as Troy Parrott, Oliver Skipp and Johnathan Tanganga could all be in line for accelerated integration into the first-team squad.